Did you know you can start a web video playing in a browser and then break it out into its own window on the desktop? Watch video in a mini player while you work on other tasks on your Mac.

Sometimes you want to watch web video, such as YouTube, Vimeo and other streaming web video, while doing other tasks, such as working, browsing the web, word processing, and so on. To do this, the web page with the video must be in its own window. It is easy to do but there are several irritations.

The main one is that the browser window has a tab bar, address box, buttons, and borders. It is messy and this detracts from the visual quality of the video. It also means that the video takes up more desktop space than it needs to. This is not a problem on a desktop computer with a big screen like the Apple iMac, but it is a problem on a MacBook with a small screen.

Picture in Picture is a feature of Chrome and Safari that enables the video to be broken out of the browser window and placed on the desktop. There are no borders, no browser controls, just the video and minimal playback controls. It is compact and more visually pleasing than a browser window.

A video can be placed out of the way in the corner of the screen while you do something else, like work, web browsing and so on. This feature is best for longer web videos, such as 20 minutes or more where you can get to work on other tasks and apps and it isn’t really worth it for a three minute video.

The Picture in Picture feature was introduced in Chrome 70 and you should already have it because Chrome auto-updates as new versions become available. However, you can always force an update by going to the Chrome menu > Help > About Google Chrome. 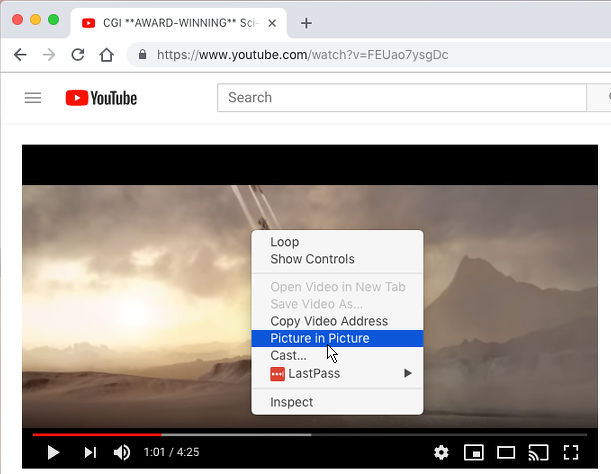 When playing a video at YouTube and some other streaming video websites, hold down the Ctrl key on the Mac and double click. A menu appears with the Picture in Picture option. Select it.

The video opens in a small window. Drag it to any place on the screen, such as in the top right corner shown in the screenshot above. The website must stay open, but the browser does not need to be on the screen. Minimise the browser and then open another app, such as Pages shown here. Now you can work while you watch.

Move the mouse over the corners of the video window and click and drag it to resize it. There is a limit to the size and it is not meant to fill the screen. However, it can be made reasonably big and is certainly watchable.

Safari has had Picture in Picture for the last few versions, but you may not have realised it was capable because it is not immediately obvious how to access it.

Visit the Vimeo website and start a video playing in Safari. In the controller at the bottom of the video window at the right-hand side is a button to enter Picture in Picture. Not all video players on all websites have this PiP button and it does not appear in Chrome, only Safari. However, Vimeo has supported Safari PiP from the start. Look for the button in video players. 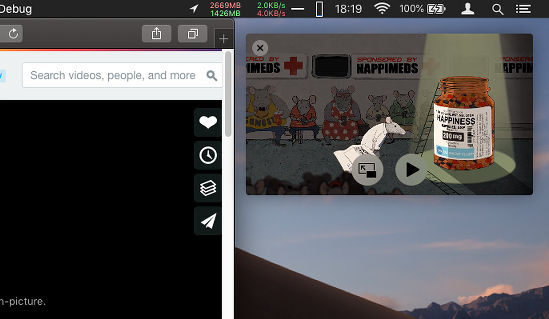 Click the PiP button while watching a Vimeo video and a small player opens on the desktop. It can be dragged to any position on the screen  and the corners can be dragged to resize it. Safari can be minimised and you can work with other apps while watching the video in the mini player window. Don’t leave the site, but you can open other tabs to browse other sites. 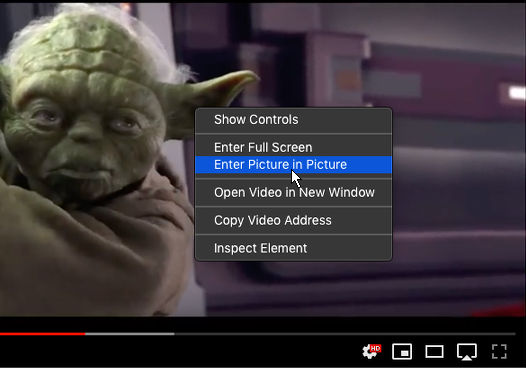 YouTube is different. See the second icon in the player toolbar above? Clicking it opens a mini player that continues to play the video while you browse other content on the YouTube website. This is available in both Chrome and Safari, but the mini video player is trapped within the browser window and cannot be moved onto the desktop.

To get true Picture in Picture, hold down the Ctrl key on the Mac and double click to display a menu and select Enter Picture in Picture to break out the video into its own mini player on the desktop. Safari can then be minimised so you can use other apps while the video continues to play. Position and resize it in the usual way.

There does not seem to be a standard way to open videos in Picture in Picture, so look for an icon in the video player controller bar or try Ctrl+double clicking the video (Ctrl+click shows a different menu and you must double click.)

About Roland Waddilove 293 Articles
Roland Waddilove is interested in computers, software and phones. Long ago he was editor of several computer magazines, but is now a freelance writer for print and web. He owns RAWinfopages.
Website Facebook Twitter LinkedIn

It's NordVPN's birthday and they have extra deals, gifts and savings! Go get them!

Ivacy VPN: The Biggest VPN Cyber Week - up to 90% off! Check offers