Microsoft has been working on improving the battery life of Windows laptops and providing the monitoring features so you can see what’s draining it. Master the new battery power tools.

Many people have switched from desktop computers to a laptop and others use a laptop as a second computer for when they are away from their work desk or home. This means that laptops are used more than ever and battery life is an area of concern for many Windows users. Basically, laptops never run for as long as we would like and battery drain is a constant worry.

How long does your laptop run on its battery? It varies with the activities we do on the computer and games for example, use a lot of battery power while word processing does not. Web browsing sometimes uses a lot, but it varies. Whatever activities you engage in, it is likely that you wish the battery would last a bit longer.

Can you get another hour’s life out of the battery? You might if you knew what was using the most power and shut it down, but how can you tell which apps are using the most power? Fortunately, Windows 10 provides the tools you need to monitor battery drain and Windows 10 Task Manager has recently been updated with new power monitoring features. 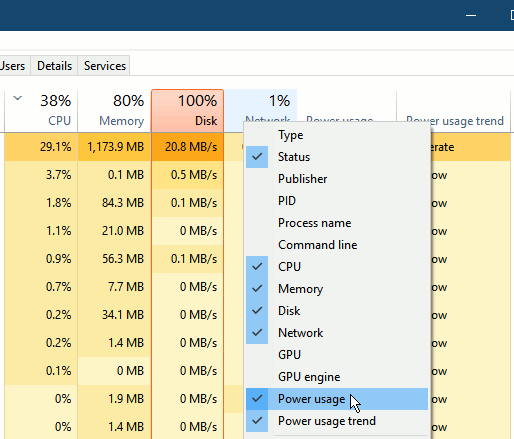 Press Shift+Ctrl+Esc to open Task Manager or right click an empty part of the taskbar and select Task Manager from the menu that is displayed. The Windows 10 October 2018 Update is required to see the power usage features.

You may find that the Power usage and Power usage trend columns are displayed automatically on the Processes tab, but if they cannot be seen, right click any heading and select them on the menu.

View and sort by power usage 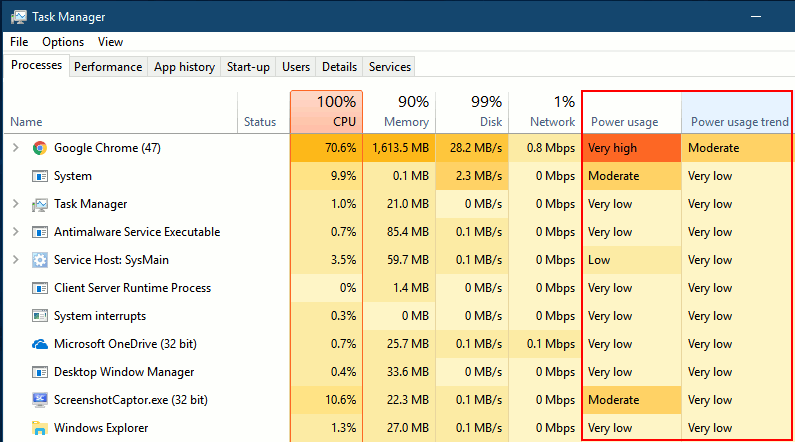 The comment in the Power usage and Power usage trend columns ranges from Very low to Very high, with the latter highlighted in red to serve as a visual warning that something is draining the battery.

To get the screenshot above, I opened more than a dozen tabs simultaneously in Chrome and then switched to Task Manager. You can see the screenshot utility near the bottom using Moderate power too. They do not always use such a large amount of power.

Click the Power usage or Power usage trend headings to sort the column by power usage. Click once to sort descending and again to sort ascending. Sorting by power usage shows which apps are using the most power and if you are not actively using them right now, they could be closed to save battery power. Switch to the app and close it/exit in the usual way. 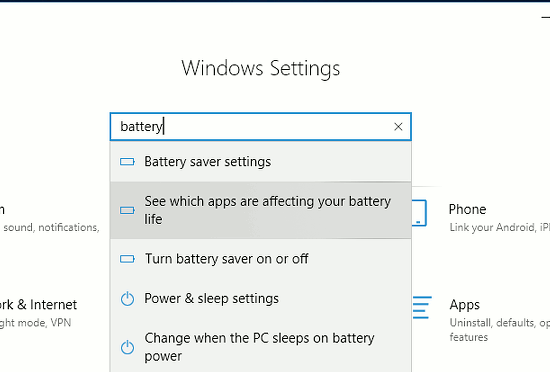 Open the Settings app in Windows 10 by pressing Windows+I and enter ‘battery’ into the search box at the top.  This shows useful settings relating to battery power. Click the option near the top, See which apps are affecting your battery. 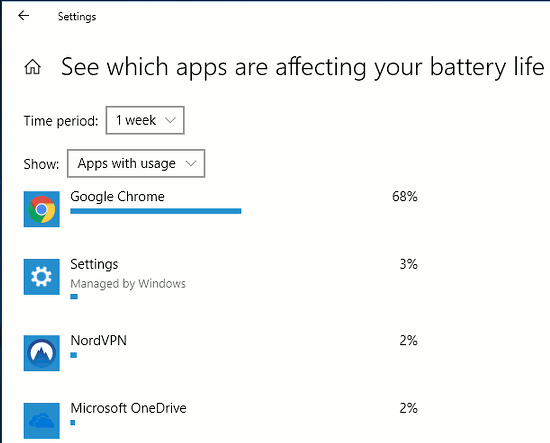 Select the time period at the top – the options are 6 hours, 24 hours and 1 week. Do this while the laptop is running on battery power because power usage is not shown when running on mains power. Any attempt to save power is cancelled as soon as the mains plug is inserted.

The apps that have used the most battery power are listed at the top. Sometimes they use the most power simply because they have been used the most. Google Chrome is at the top of my list with 68% power usage mainly because I have it permanently running whenever the laptop is on. I use it for hours every day.

If you see an app here that shouldn’t be here, such as an app you rarely use, but it is using battery power, then that would be suspicious. You might want to check it is not running or even uninstall it if it is not needed. This will boost battery life on the laptop.

Check foreground and background battery use 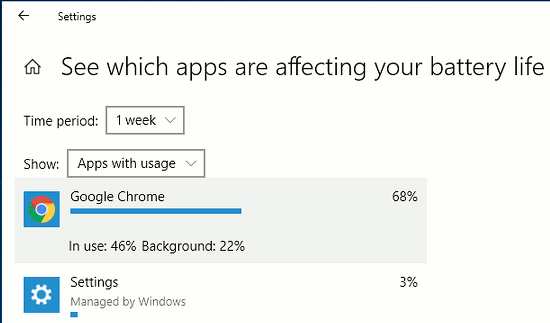 Click an app, such as Google Chrome, to expand it and see foreground and background power usage.

Stop apps in the background 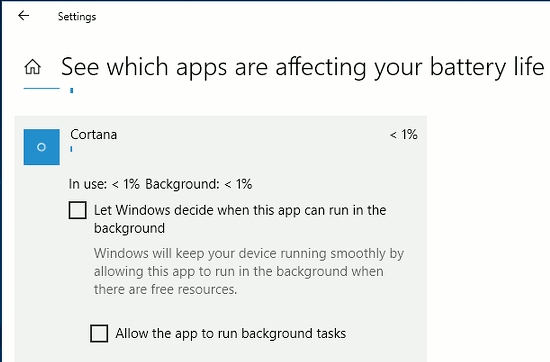 Some apps, but not all of them, provide additional controls that let you choose whether they can run in the background. Cortana is one of them. Click it to expand it and clear the checkboxes stop it running in the background.

Battery Saver and setting the power mode to Best Battery Life (click the battery icon in the taskbar), probably stops it running in the background.